Which means: MY BIRTHDAY MONTH! I’m turnin’ 25 y’all – get the presents a-comin! 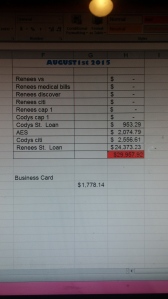 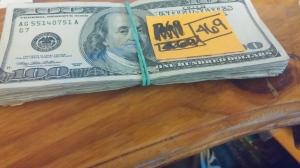 Call the success police because I am running willlld and causing destruction! 🙂

Now I’m not mocking PROGRESS – hey, the numbers still went down. But I would always love to see more than that. SO, instead of whining about it we’ve decided to make a change.

Live on cash. We’ve talked about it before, but never had the money on hand at the time to float us by, or were just plain and utterly lazy about it. It is SO much easier to just swipe. But it’s a PRISON.

I’ve learned to think about credit cards as they essentially are – a LOAN.

Every transaction is a mini – loan. You want that Gatorade or movie or whatever, and you’re gonna charge it cause you don’t have cash on you? Well, that’s cool. You’re gonna pay it BACK, with interest kid. And, you’re probably gonna forget about all the small transactions that add up and compound the interest until it whips you in the face! It’s common sense, but unless you think about it EVERY SINGLE TIME, the facts can be mindlessly swept under the rug.

Plus, like this month and probably every month, emergencies/unexpected/life happens. The beauty of credit cards for those that can really manage them is that when you don’t have the cash for something REALLY NEEDED or EMERGENT, it can ease stress momentarily. But – that’s also what an emergency savings can be for – and save on interest in the end.

So we have $469 on hand right now. We are going to budget for food/bills/etc from this CASH until Cody gets paid again. Every dollar I make writing/Etsy/side work is going towards the business credit card so that can be paid off as quickly as possible so we can start making an actual PROFIT and have REAL profit margins (however small, haha). The rest of the cash after that will be put into the Emergency fund to start it. Our paychecks will be put on debt, with enough cash to budget for the next month. Credit cards are going to be LOCKED AND BURIED IN ANTARCTICA SOMEWHERE.

We’re hoping to live on cash only, pretty much for the long term – Using credit cards only if necessary or extremely warranted.

Living off cash will definitely make it easier to stick to budget. It’s hard and annoying to keep up with the transactions that you forget about (or your sig other doesn’t tell you about… 😉 ) and by the time you have a catch up day.. BAM, over budget.

So let’s see how it goes. Like my fitness journey, enough whining and waiting for something to happen. MAKE IT. 🙂 Stick to it. See results.